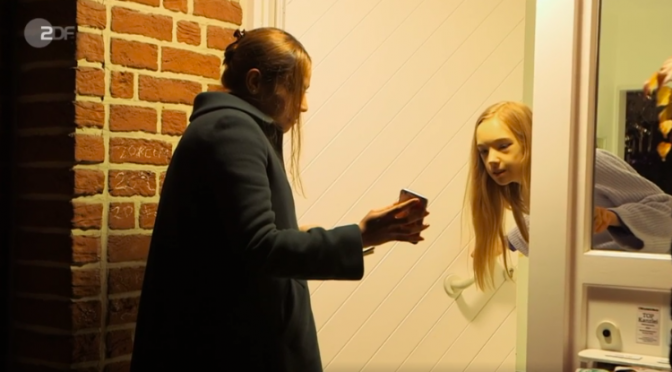 In May 2019 the now 19 years old Naomi Seibt from Münster, Germany, started her own YouTube channel. Since then, she has successfully collected about 62.000 followers on the platform by spreading far-right thoughts and ideology in a seemingly harmless nevertheless pseudo-scientific way. Within one year, Seibt’s popularity has arrived at the mid-field of the German extreme right-wing influencer scene and build her own community especially amongst members and supporters of the German far-right party „Alternative für Deutschland“ (AfD).

Living at her mother‘s house in the suburbs of Münster, a vibrant university town of 350.000 inhabitants in the countryside north of the Ruhr area, Naomi Seibt aims to gain similar popularity as other far-right influencers which partially serve as role models for her.
Naomi Seibt became known amongst the far-right community some time before she started her YouTube channel. In 2018 she won a poetry contest named „brave girls“ organized by member of parliament Nicole Höchst, AfD. She was also awarded a price by the local „Hayek Club“, a neoliberal right-wing lobby organization that features members of the AfD within their ranks. In 2016 she started writing for the far-right blog „philosophia perrenis“, which regularly features articles written by her mother, Karoline Seibt, who is a lawyer as well as a strong supporter of the (local) AfD. Naomi Seibt stressed numerous times how important her mother has been for her own political socialisation and orientation. Now she is ready to step out of those footsteps.

Starting with this kind of name recognition, it is hardly surprising that Naomi Seibt managed to get her YouTube channel going viral within the far-right online community in a relatively short amount of time. Brittany Sellner (former last name Pettibone), one of the leading activists of the racist „Identitäre Bewegung“ (Identitarian Movement) and an American far-right activist, helped her out by interviewing her [1]. Furthermore Seibt was promoted by numerous activists of the AfD.

All pretty and petite? Rhetorical and stylistic means

Her videos follow a specific homemade style. Recorded at her home with Seibst standing in front of a closet or an empty wall, leaving her as the lone center of attention, the films are meant to give her audience a feeling of authenticity and approachability. Her role model seems to be the afore-mentioned Brittany Sellner as well as her husband, the Austrian far-right activist Martin Sellner, whose videos try to transport a kind of homestory vibe to create an approachable image for the couple. In her videos, Seibt manages to reproduce classic far-right propaganda and ideology in a seemingly harmless, conservative or as she likes to call herself,„libertarian“ way. Often headed by pseudo-scientific findings, Seibt mimics other far-right academics and argues on the basis of „logic“ and „rationality“. Confronted with criticism, Seibt either declares herself a „Andersdenkende“ (dissenter), the victim of the „mainstream media“ or uses her relatively young age to stage herself as an innocent, naive young woman „just“ asking questions about the world.

All those little things that I fear: Far-right content

Indeed, she propagates nationalistic, anti-feminist, racist and anti-Semitic views, thoughts and (conspiracy) theories. Seibt’s chain of arguments regularly feature neoliberal ideas, theories and visions matching her self-declared libertarian mindset. Within this logic, equality is a mere thing of will, hard-work and self-optimization rather than a question of equal opportunities, education and living conditions in society. Seibt transfers and links this logic to other and principles of belief, e.g. when she links welfare costs and unemployment rates to immigration.

It’s not surprising that Seibt describes herself as a „liberal cultural nationalist“. All rhetorical whitewashing put aside, Seibt’s concept of nationalism resembles the concept of „ethnopluralism“ which is the main concept of the „Identitäre Bewegung“ (Identitarian Movement), a far-right group from Europe. It is based on the racist conspiracy theory of the „great replacement“ by the French far-right academic Renaud Camus. The far-right terrorists who carried out the attacks in Christchurch, New Zealand, and in Halle, Germany, partially based their manifestos on this racist, anti-Semitic and anti-feminist theory which is also popular amongst the politicians, members and supporters of the „Alternative für Deutschland“ and other far-right movements in Germany.

Anti-feminism is also a main point on Seibt’s agenda: In her video „fierce without feminism“ [2] she states that feminism is „no longer needed“ as gender equality is already achieved. Following this logic, feminists would be sore losers that just did not succeed within the market and would do „true feminism“ a disservice. Again, it is not surprising that inter-sectional discrimination has no place in Seibt’s political view of the world.

Seibt took her anti-feminism to the streets in 2018 when she attended a so called „1000 Kreuze Marsch“, an anti-abortion rally run by fundamentalist Christians, in Münster. Alongside Seibt marched members of the „Identitäre Bewegung“ (Identitarian Movement) and the „Burschenschaft Franconia“, a local far-right fraternity. Amongst them Robert Malcoci, a well-known neo-Nazi and activist of the „Identitäre Bewegung“. [3,4] Following her participation in this fundamentalist rally, she posted a video about the „Pride Weeks“ where she addressed her concerns about homosexuality and the LGBTQI*-community.

While structural anti-Semitism as part of conspiracy theories was always a part of Seibt’s videos, openly anti-Semitic Hate Speech was not seen on her videos. That changed after the far-right terrorist attack on a Synagogue in Halle in October 2019. Shortly afterwards, Seibt joined an online conference of far-right YouTube activists marking „Jews as the characteristic feature of oppression of the Germans“. Confronted by journalists, Seibt later refused to comment on that statement but stressed that if somebody would deem this statement as anti-Semitic that would be none of her business. [5,6]

Seibt also was invited as a speaker to the New Year’s welcome event of the local branch of the far-right party „Alternative für Deutschland“ in February 2020 [7]. Rüdiger Lucassen, one of the speakers at the event stated that „we are proud of the achievements of our mothers and fathers and not ashamed of them“. [8] Since Lucassen was born in 1951, his parents were part of the generation that enabled, supported and committed crimes during the reign of the Nazis in Germany.

Just your typical prototype? The „Anti-Greta“

At the moment, the Heartland Institute, a right-wing think tank denying climate change, is trying to build up Naomi Seibt as a counterpart to the famous Friday For Future activist Greta Thunberg. Seibt also attended the „Climate Reality Forum“ in Madrid, an international conference of climate change denying „skeptics“ in December 2019. [9, 10] Seibt has attacked the Friday For Future movement long before in her videos, denouncing them as kids „indoctrinated“ by the „green and leftist lobby“. A narrative that is also popular among and frequently propagated by the members and supporters of“Alternative für Deutschland“. Recently she has been interviewed by several international Tv-stations mainly in the US and Australia. Even though Seibt has evoked several times, that she is no „Anti-Greta“ she is indeed perceived as one.

The strategy of the Heartland-Institute sadly seems to be working as planned. Especially in the field of climate change Seibt is trying to propagate her perspective as scientific and well-reflected. She is building up a narrative in which she comes across as a sceptical but well-informed young woman who simply changed her mind from being a „climate alarmist“ to a „climate sceptic“. Further she claims to be interested in an open discussion based on scientific facts,t even though there is no room for facts or discussion in the field of politics she entered. And above all she excludes herself from an opportunity to an open discussion by propagating discriminative and far right views.

Exposed and it’s no big surprise: A devout far-right propagandist

Confronted with criticism about any of these given points, Seibt admits that „from a perspective on the political spectrum as a whole“ she would rather belong to the „conservative end“ of it. A well-known strategy of the German far-right by which its members try to remain approachable for conservatives.
With her unsuspicious appearance and rhetorical white-washing Naomi Seibt tries to convince the audience that she is a „skeptical, conservative liberal/libertarian“, not the calculating, die-hard far-right activist that she is. Don’t step into that trap.